Gun control continues to dominate the federal and state political scene, with opinions and votes split along party lines. 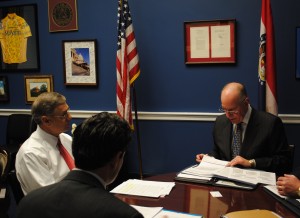 Central Missouri’s Republican Congressman Blaine Luetkemeyer has met with the Social Security Administration to ask them about their role in gathering private documentation on Missouri conceal and carry licenses. The administration says the Missouri Highway Patrol and Department of Revenue provided the information, but it was never kept or accessed. Luetkemeyer says he’s satisfied with those answers.

He says in a face-to-face meeting, he engaged the agency both verbally and in writing to get responses to detailed questions about its role in seeking the information.

“I’m glad to have finally met face-to-face with the federal investigators to get answers to our questions and I’ve also encouraged them to answer questions from the state legislature,” Luetkemeyer said in a press release. “It’s important for me to hear from federal officials directly and I am satisfied with the result of the discussion. Rest assured we will continue to ensure that the federal government always abides by the laws and protocols under which it must operate.”

Sen. Claire McCaskill, a democrat, says she understands the concern… to a point. However, she says it should not be dominating the last few weeks of the legislative session when Medicaid expansion is at a standstill, Missouri roads and bridges are crumbling, and the state’s education funding is one of the lowest in the nation.

McCaskill says she thinks the GOP majority in the Missouri Legislature is ignoring the true concerns of its larger constituency and focusing on the demands of a small faction of the state’s population.

Meanwhile, Sen. Roy Blunt, a republican, voted against a federal measure that would require background checks for firearms sales at gun shows and through the internet. The bill failed in the U.S. Senate by only six votes.

Previous Post: « MoDOT warns several roads closed due to flooding
Next Post: Blues beat Coyotes in shootout to move up in standings »