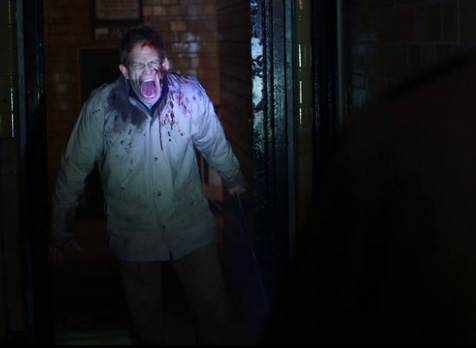 Andrew P. Jones says the goal of this film was to make a micro budget movie that feels big. All the effects and all the gore. Jones played an integral role in the creation of Hook, Batman, Groundhog Day, In Living Color, Roseanne, Muppets Tonight, Everybody Loves Raymond, Married With Children and more.

“With thirty years of filmmaking experience, I’ve tapped into my background in special effects, directing, writing, and post production to craft a film that we know will entertain and impress,” Jones says on the film’s website. “The theory was straight forward… write a fun script, cast amazing actors, pull together an exceptional crew, and find a location that is jaw dropping. And so far we have been successful in all of the above.”

He says “Apparitional” was conceived and produced with one goal in mind; to create a micro budget feature film that looks and feels big budget.

Linara Washington, Jones’ wife and co-director and producer of the film, has experience from a variety of movies and television, including Barbershop 2, American Dreams, E.R., Castle, CSI, Ghost Whisperer, and most recently NCIS. among others. Washington was the only female actor featured in the Brad Pitt film, Killing Them Softly, which debuted at the Cannes Film Festival.

Washington says there were a few instances on the set — at the prison — where it seemed the rumors of paranormal activity were more than just rumors.

Actor Charley Koontz is perhaps best known for his work as “Fat Neil” in the sitcom Community, currently in its fourth season on NBC. Koontz plays one of the ghost hunters in “Apparitional,” a character that turns out to be the hunted.

Post production on the film is happening now in Los Angeles. It is set for release in June.

Jones is still raising funds for the completion of the film. According to the film’s website at Iniegogo, he is about $3,000 short of his goal of $10,000.