You are here: Home / Sports / Miller Time! Shelby pitches gem over the Brewers 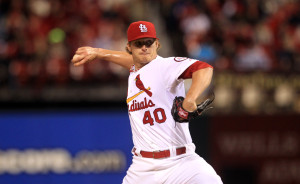 22 year old rookie Shelby Miller gave up one hit over seven innings and had he not run his pitch count up to 113, he probably would have went the distance as the Cardinals edged the Milwaukee Brewers 2-0. Miller’s lone hit allowed was a single by Norichika Aoki to open the game.

Miller used nothing but raw powers to overwhelm Milwaukee hitters. “They were trying to catch up with it,” manager Ron Roenicke said. “After the first time through, it wasn’t like he was surprising them. They just weren’t catching up to it.”

Miller struck out eight and walked none.

Former Cardinals pitcher Kyle Lohse returned to Busch Stadium and certainly pitched well enough to get a win on most nights. He pitched six innings and allowed both runs on six hits without walking a batter. One of those hits was a one out homer by Yadier Molina in the seventh. Molina, who would be the most familiar with Lohse, also doubled in the second when the Cardinals scored their first run.

Carlos Beltran led off with a single and moved to third on Yadi’s hit. Beltran scored on David Freese’s single and had runners on first and third with no outs, but Lohse got Pete Kozma to strike out and Miller to ground into a double play.