You are here: Home / News / Crews continue to restore power to those affected by storm damage

Ameren Missouri Crews report there are a significant number of broken and damaged power poles in North St. Louis County and Franklin County. 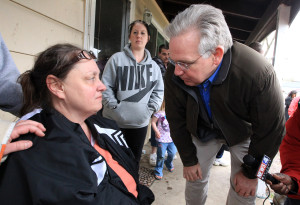 Missouri Governor Jay Nixon consoles a resident who suffered tornado damage to her home in Hazelwood, Missouri on April 11, 2013. An EF-2 tornado bounced a path through the St. Louis area late April 10, 2013. Minor injuries were reported and officials say more than 100 homes have significant damage. At the height of the storm, more than 45,000 people were without electricity. UPI / Bill Greenblatt

The company says it is making progress toward restoring power to customers who were impacted by the severe storm and winds that passed through the St. Louis area Wednesday night.

Initially, about 43,000 customers were knocked offline, but Ameren Missouri says they’ve restored power to about half of them.

Ameren says as of Thursday morning, 900 linemen, vegetation workers and field checkers from Ameren Missouri and Illinois are working in the hardest hit areas.

“We are making progress and will continue to work diligently throughout the day to restore power to our customers who have been impacted,” said Michael Moehn, senior vice president of customer operations at Ameren Missouri. “As we continue with restoration efforts, our primary concern is the safety of customers and crew members in the field.”

Ameren officials remind folks that the most important safety rule is to stay clear of downed power lines and always call Ameren Missouri at 1.800.552.7583 or 911 if they see downed lines. ”

Assume all downed power lines are energized,” company officials warn. “Stay inside because you may walk into an energized power line. Stay clear of brush, shrubs and downed trees that may hide downed lines.”

Also, the company encourages curious bystanders to avoid the hardest hit areas so that crew members can focus on restoration efforts.