You are here: Home / News / Keith steps down as MoDOT director, Nichols steps up

Missouri Department of Transportation Director Kevin Keith has stepped down and Chief Engineer Dave Nichols now assumes the role of interim director for the department.

Keith submitted his resignation today and will leave his role immediately, taking a medical leave of absence. He says he plans to officially retire July 1. 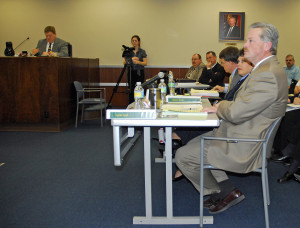 Kevin Keith presents a report to the Highway Commission in 2010, when he was still Chief Engineer, before replacing former Director Pete Rahn (top left). Keith has resigned, citing medical reasons.

Missouri Highways and Transportation Commission Chairman Joe Carmichael says Nichols will step in as interim MoDOT director for a minimum of one year; the search for a permanent replacement will begin at that time.

“The commission has accepted Kevin’s resignation and we are grateful for his long career of dedicated, results-oriented service to MoDOT and the citizens of Missouri,” Carmichael said in a press release. “We are committed to a seamless leadership transition for the benefit of our employees, our customers, and our stakeholders.”

Nichols has served with MoDOT for 29 years in a variety of leadership roles, including his work as the department’s first director of program delivery prior to becoming chief engineer. He has also served as district engineer for the department’s Northwest District headquartered in St. Joseph and worked in MoDOT’s Kansas City District.

“The commission is very confident in Dave’s ability to carry MoDOT forward in all respects,” Carmichael says.

Keith has served the department for nearly 30 years, nine of them as Chief Engineer and two as director.

Among Keith’s accomplishments, he is nationally recognized for his innovative efforts implementing “Practical Design” — what MoDot calls “a no-frills approach enabling MoDOT to satisfy customer needs while saving money to put toward more transportation improvements.”

“Practical Design has saved Missouri taxpayers more than $1 billion and has been adopted in numerous other states,” the commission said in a statement when Keith was chosen as director.

Before becoming chief engineer, he served as transportation planning director and, prior to that, as district engineer for MoDOT’s Northwest District headquartered in St. Joseph. He has also worked in Branson, St. Louis and Chillicothe.

He replaced Pete Rahn in November 2010, who resigned to take a consultant position in Arizona.