More than 8,000 anglers will line the shores of Missouri’s lakes and rivers today … the opening day of trout season. Department of Conservation spokesman Jim Low says March 1 marks the day when die-hard anglers flock to Missouri’s four state park lakes to wet a line. The season runs through Oct. 1. 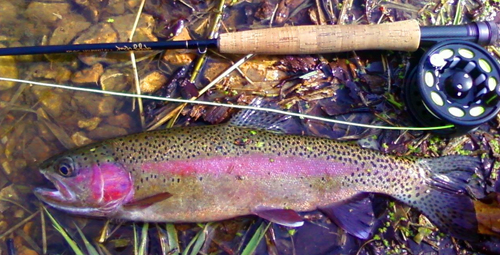 Low says there are four locations the Conservation Department operates trout hatcheries and are open for fishing — Bennett Spring near Lebanon, Montauk near Licking, Roaring River near Cassville, And Meremec Springs.

Anglers are allowed to keep up to four trout, but Low reminds everyone that those ages 16 to 64 need a Missouri fishing permit, available on site or online at the Conservation Department website.

There are several other public and private lakes and rivers throughout the state stocked with trout. Low reminds anglers those 16 to 64 need a Missouri fishing permit. You’re allowed to catch and keep up to four trout.

March 15 is the opening day of paddlefish season. A lesser known sport but one he says draws anglers from all over the country and even other countries. Low says paddlefish get very big, put up a good fight and are very good eating … especially smoked.