Gov. Jay Nixon has asked the Mental Health Commission for feedback on what Medicaid expansion could do for mental health services in Missouri. 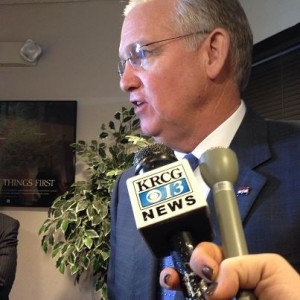 Nixon says Missouri can prevent tragedies by expanding mental health services to those who need them, pointing to the mass shootings in Colorado and Connecticut. He says early intervention and expanded treatment can help people lead fuller lives and make the difference for entire families.

He says Medicaid expansion would get people off waiting lists for treatment, and while he’s hoping the legislature will back him in that effort, the House has at the same time drafted a budget that does not include $46 million in federal dollars for an expansion.

Missouri Mental Health Director Keith Schafer says he and the commission will work with Nixon to explore the possibilities.

“There would be about 50,000 who would have coverage who don’t today,” he says. “About 34,000 of those people actually come through our door looking for help and have no means to pay for it.”

Schafer says the best the state can do for those people is offer immediate crisis intervention, but it cannot implement long-term treatment plans, which many of them need.

Nixon says waiting lists for treatment are sometimes five and seven years long, too long to make a difference for those who need immediate help.

“Right now, many people with severe mental illness only get treatment when they reach a crisis point,” Nixon said. “That’s too late. Now, by accepting federal dollars to strengthen our Medicaid system, we have a unique opportunity to help thousands of Missourians with mental illness get access to early, effective treatments — at no cost to the state for the first three years.”

Under the proposed expansion, federal funding will cover 100 percent of the costs of expanding Medicaid to uninsured Missourians making less than 138 percent of the Federal Poverty Level for the first three calendar years. This will bring a total of $5.7 billion back to Missouri and provide coverage to an additional 300,000 Missourians – at no cost to the state. An estimated 50,000 of these previously uninsured Missourians would seek mental health services, including treatment for serious mental illness. An individual living at 138 percent of the Federal Poverty Level in 2013 makes $15,856 a year.

However, the Republican-led legislature has said it doesn’t trust the federal government to come through with the funding, leaving Missouri taxpayers with the bill. Missouri’s health industry, which has sided with Democrats on the issue, say that Missourians already pay the federal taxes that are going to support expansion, and that if Missouri doesn’t take advantage of the program, that money will go to other states that do.

Nixon says this should not be a matter of politics anymore, and that both sides agree that more attention needs to be paid to mental health needs and services.