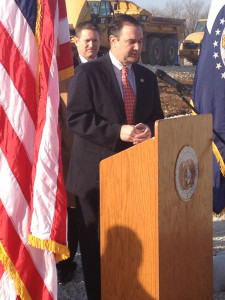 The bill would create a temporary, 10-year, one-cent sales tax that would generate nearly $8 billion for transportation.

McKenna says it was a personal experience that made him want to make Missouri roads safer.

He says a few years ago, a road in his county — Highway 21, known as “Blood Alley” — had more fatalities than anywhere else in the country.

McKenna says there have been major improvements to Highway 21, “but we also have another — it’s perpendicular to Highway 21 — Highway MM and W known as ‘Death Valley … a friend of mine that lived down the road from me as a kid, he was killed on Highway MM 10 years ago.”

He points out that five years ago, 12,000 people were killed on Missouri roads, compared to last year when that number dropped to 800.

Kehoe says filing this bill is a start to the solution, and that people should be able to vote on what they would like to see happen on state roads.

“That bill will bring us to a point where legislators can put this through the process, so then Missourians can then vote on what they want done with their roads,” he says. “It’s really not MoDOT’s roads, it’s the people’s roads and this has gone on long enough where I think it’s the people’s right to decide if they want to continue with the infrastructure that we so badly need.”

Missouri Highways and Transportation Commission Chairman Rudy Farber issued the following statement in response to the bill introduced by Senators Kehoe and McKenna, thanking them for their leadership in announcing the funding measure that could address Missouri’s transportation needs for the next decade. “Improvements made possible by the proposed one-cent sales tax would benefit every citizen. Safer highways, less congestion, and a stronger economy with more than a quarter-million supported jobs are to be expected should Missouri voters agree. We appreciate the Legislature’s attention to the importance of investment in Missouri’s transportation system.”

Should legislators pass the measure, it would be put before Missouri voters for approval.

There’s also a similar measure proposed in the House by Rep. Dave Hinson (R-St. Clair) who met with Sen. Kehoe about the bill. The language of both bills are the same, but they were passed by individual houses (Senate and the House). Hinson says one of the changes Kehoe made was that he took out specific ballot language that the House bill has kept in.