A St. Louis senator says the President’s executive order doesn’t address gun violence in the urban core, where children are killing children at an alarming rate. 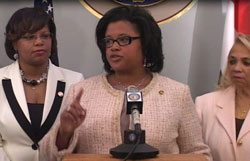 Sen. Maria Chappelle-Nadal (D-University City) says she has no desire to take people’s guns away, or even limit what kind of gun it is or the number of rounds it holds. Her concern is one she says is missing from the national conversation. She says just in her district, 12 kids have been killed over the past few months. And she says parents need to be held responsible and be involved.

“Every single childs life is valuable, there is not one child who has a greater value than another child’s life,” she says. Neither the President’s executive order on guns nor bills filed in the Missouri House of Representatives “deal with what is happening in our urban cities.”

Her bill would require parents to notify their children’s school if they own a firearm. It would make it a crime to fail to report gun ownership to a school and to store a firearm in a place where a child can get to it. Chappelle-Nadal’s bill would also criminalize failure to prevent a child from possessing illegal firearms; her bill holds parents criminally liable when they knowingly allow their children to possess illegal firearms.

The kids have guns either because they’re involved in gang activities or they’re just getting involved in the wrong activites in general, Chappelle-Nadal says, “and it’s time to say to those parents … we’re not accepting it anymore.”

She says those who don’t know poverty can’t understand how it leads to violence.

Chappelle-Nadal says she is a second amendment supporter, and that her bill doesn’t seek to take anyone’s legal firearms away, nor does it make any certain types of firearms illegal. She says she just wants the legal owners of those guns to be responsible for them.

The bill, introduced by Missouri Democratic State Sen. Maria Chappelle-Nadal, would make it a crime to fail to report gun ownership to a school and to store a firearm in a place where a child could possibly access it. The legislation also criminalizes failure to prevent illegal possession of a firearm by a child under the age of 18.

“I am not trying to take away the gun rights of any parents or any other citizens,” Chappelle-Nadal says. “It encourages parents to make sure they store their guns safely in their home, it also gives the school districts the opportunity to help encourage gun safety in the community and in the household.”

Chappelle-Nadal says she has filed dozens of bills during my service as an elected official, however, few are as close to my heart as this measure.