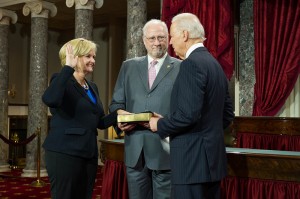 “I pledge to use these next six years to keep fighting as hard as I know how for the state that I love,” said McCaskill, a former Jackson County Prosecutor and Missouri State Auditor.

“I plan to fight for new opportunities for my kids and grandkids, and for all young Missourians — to create more jobs, and continue my dogged effort to bring down the national debt. And any politician or contractor tempted to waste taxpayer dollars for their own benefit should be on notice-if I have it my way, these next six years will see a new level of accountability in government.”

McCaskill was re-elected to her second term in the U.S. Senate in the Nov. 6, 2012 general election. She will serve with freshman U.S. Sen. Roy Blunt, a republican, who ends his first term in 2016.