You are here: Home / News / Christmas night blizzard for the Bootheel, travel discouraged

A blizzard is in the forecast for the state’s Bootheel region tonight through tomorrow morning. 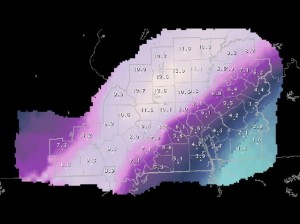 The National Weather Service has increased its snowfall predictions, now saying nearly 11 inches of snow could fall in Cape Girardeau county, with 7 to 10 inches across the region. A blizzard warning includes 11 Missouri counties until noon tomorrow.

“I think we’re getting more and more confident as the actual track (of the storm) becomes more certain, as to which way this low pressure system that’s right now down in west-central Louisiana and is slated to move into Tennessee by later tonight into tomorrow morning, and usually your heaviest snows are on the northwestern side of a low pressure system and that looks to be setting up right over Southeast Missouri up into Southern Illinois at this time.”

The updated track of the storm has the brunt of it now passing south of the St. Louis region, with heavy snowfall expected as far north as a Farmington to Salem, Illinois line.

Winds are predicted to be sustained at 25 miles per hour with gusts of 35 to 45 miles per hour. That could lead to blowing and drifting of snow and completely eliminate visibilities.

Wielgos says it is likely some roads in Missouri and neighboring states will become impassable during the storm.

“It’s just going to be a very treacherous night and early tomorrow morning to be out driving out on the roadways.”

The Missouri Department of Transportation has issued a No Travel Advisory for the region, advising motorists to avoid travel in that region.

The Department says in a statement, “Motorists should be advised that travel during this type of storm is very dangerous. Should you attempt to travel, bring your mobile phone and winter survival supplies. If you do become stranded, stay with your vehicle and call 911. Be aware that emergency responders may have difficulty reaching you.”

The Department urges Missourians to use its online Traveler Information Map for travel condition updates. The Highway Patrol also offers an emergency phone number for people needing assistance, at (800) 525-5555 or *55 from a cellular phone.