You are here: Home / Sports / Former Chiefs player uses his head…but not in a good way 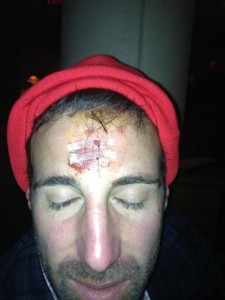 Note to self. Never headbutt another person. Second note to self…especially if they are wearing a helmet. Apparently, former Chiefs and New England Patriots linebacker Mike Vrabel got a little caught up in the excitement of a recent Ohio State-Michigan football game. Vrabel, a defensive line coach for the Buckeyes, decided to get into the game spirit by headbutting one his players…who was wearing a helmet. The results were not good. In fact, Mike’s wife Jen, humiliated him even further by posted a pic on [email protected]

“Here’s the pic to prove it! Best not to headbutt a guy w/a helmet on when you aren’t wearing one!!”