Gov. Jay Nixon says he’ll include Medicaid expansion in his 2014 budget. This announcement comes on the heels of a push to do the same by the state’s medical industry leaders. 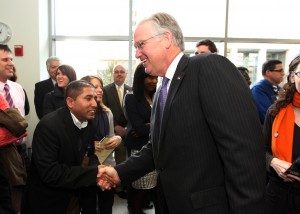 Gov. Nixon makes the announcement in St. Louis, visiting with those in attendance. UPI / Bill Greenblatt

Nixon says he’ll work with the legislature to get across to them a solid understanding of how important this is.

“The Affordable Care Act allows for an expansion of Medicaid to cover millions of Americans who can’t afford health insurance,” he said in a conference call with Missourinet. “This is not the time to reopen the debate on the act, or re-argue the merits of the act. Congress passed it, the President signed it, and the U.S. Supreme Court upheld it. It is the law of the land. So today our choice is not how to follow the law, but how to implement it so that it is what’s best for the people of Missouri.”

Nixon says an overnight visit to any emergency room shows the necessity of expanding healthcare to Missourians who cannot afford insurance.

And he agrees with medical industry leaders in the state that if Missouri does not opt into the expansion, federal funding for the program will go to other states. Nixon is traveling the state today to visit hospitals and make the announcement that he’ll do everything he can to push forward with Medicaid expansion in Missouri.

The expansion would extend coverage for an additional estimated 300,000 Missourians, and would also be a fiscally responsible move for the state of Missouri, Nixon says, because federal funding will cover 100 percent of the costs for the first three years, and 90 percent or more in subsequent years.

“More Missourians will be able to receive timely preventive services like immunizations, prenatal checkups and cancer screenings, in addition to other high-quality health care in hospitals, clinics, FQHCs, clinics and rural health care centers all across our state,” Nixon says. “This will improve the health and the quality of life for hundreds of thousands of Missourians, and transform the expensive, scattershot way we now provide care for people with no health insurance.”

Currently, hospitals are reimbursed for treating people who have no health insurance. Under the Affordable Care Act, payments to hospitals that serve the uninsured will be reduced. If those payments are not offset by an increase in federal funds to cover the cost of that care, hospitals will have to bear those costs. That results in the high cost of caring for the uninsured being passed along to employers and individuals who must pay higher premiums for their health insurance.

In addition, a report came out on Wednesday showing the clear economic benefit to Missouri of providing expanded health care coverage, using the available federal funds. The University of Missouri report showed that the additional funding for health care will create 24,000 new jobs in Missouri in 2014 alone.

Missouri Hospital Association CEO Herb Kuhn joins several medical associations in saying this is not a political issue, and points to a study done by the University of Missouri on the economic impact. He says not expanding Medicaid would hurt hospitals, especially those serving low-income patients.

The report says participating in the Medicaid expansion would create 24 thousand jobs, bringing the state’s unemployment rate down to 6 percent; and would bring in $8.3 billion in federal funding through 2020.

Joseph Pierle, CEO of Missouri Primary Care Association and Chair of the Coalition for Healthy Economic Growth, says, “Our hope is that with this report, they will see the economic and health benefits to accepting the new federal healthcare funding, so that we may avoid leaving the working poor with no options.”

“The bottom line is that this is not a political issue for us,” he says. “The health of our economy and the physical and mental well-being of our State is not Republican or Democrat, blue or red. This is the real world. Our providers are on the front lines, every day, whether it’s in a hospital emergency room, Community Health Center, Community Mental Health Center, Rural Health Clinic, or a private doctor’s office; they face enormous challenges in providing care to the uninsured.”

“It makes no fiscal sense to send our federal tax dollars to our neighbors in Illinois.”