You are here: Home / Sports / Sanchez solid in Jets win over Rams 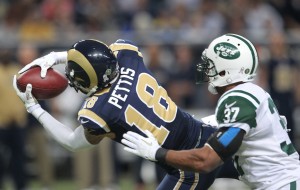 Austin Pettis catches the football in front of New York Jets Yeremiah Bell for a 36-yard gain in the first quarter. UPI/Bill Greenblatt

New York’s Bilal Powell ran for the first two touchdowns of his career, Chaz Schilens scored on a 25-yard reception and Nick Folk kicked a pair of 51-yard field goals for the Jets.

Brandon Gibson caught a pair of short touchdown passes for the Rams turned the ball over three times. The Rams who relied on their defense heavily during the early part of the season hasn’t forced a turnover in five straight games, tying the NFL’s longest streak for games without a turnover since 1950.