A St. Louis area man who has served nearly 30 years in prison is free today after a Cole County Judge reverses his conviction for a 1982 rape and murder. 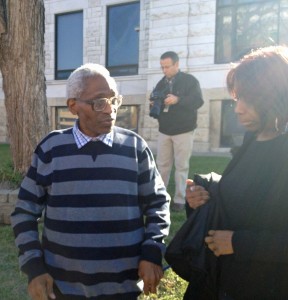 George Allen was released from Cole County court this morning … he had been serving a 95-year sentence in the rape and murder of Mary Bell.

Allen’s mother, Lonzetta Taylor, says she is overjoyed at his release, and is joined by Allen’s sister, Alfreda, in saying their immediate plan is just to be together as a family. Taylor says she never doubted his innocence since he was with them at the time of the crime, but she says she knew he would be released in God’s time. She admits the last 30 years have been hard on her.

Attorney Tim O’Connell with St. Louis law firm Bryan Cave says the police work, investigation and evidence were questionable at the time, but the prosecutor was able to get a conviction on a second trial. He says The Innocence Project was integral in providing legal expertise on the case and finding the evidence that cleared him.

Judge Dan Green says the appeals court in Kansas City and possibly the Missouri Supreme Court may review the case.

The body of Mary Bell was found inside her home on February 4, 1982. An autopsy showed she’d been raped, stabbed and her throat was slit.