Democrats in the Missouri House of Representatives have selected their slate of leaders for the 2013 legislative session. 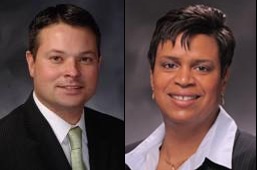 House Democrats have chosen Representatives Jacob Hummel and Gail McCann Beatty to lead them in the 2013 session.

House Democrats face the largest Republican majority in the history of the state, with the GOP holding 110 of 163 seats.