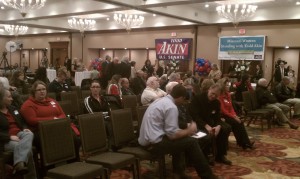 Supporters for U.S. Senate hopeful Todd Akin begin to gather at a rally in Chesterfield, MO.

Ryan Hite, campaign spokesman for U.S. Senate candidate Todd Akin (R),says based on a general feeling of what the camp has been seeing and hearing from people leaving the polls, they are very confident as they wait for the initial numbers to come in.