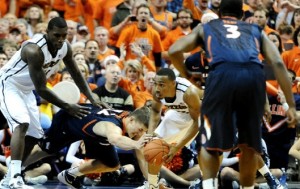 “Scottrade Center has been the proud home of the annual Braggin’ Rights game since the building opened in 1994,” said Tom Stillman, Chairman of the St. Louis Blues and Scottrade Center. “We are thrilled that this St. Louis tradition will continue through 2017.”

“The Braggin’ Rights Game has become a holiday tradition for both Mizzou and Illinois fans and this announcement is a shining example of two athletics departments working to keep tradition alive despite the changing landscape of scheduling in college basketball,” Missouri Director of Athletics Mike Alden said. “I want to thank the city of St. Louis for being such a great host for the country’s top non-conference rivalry game.”

Illinois holds a 20-11 series advantage in St. Louis and an 11-10 lead in games over the last 21 years. Missouri has won the last three meetings following up a nine-game winning streak by Illinois from 2000-08.

Overall, five games in the Braggin’ Rights series have gone into overtime, and 14 games have been decided by two possessions or fewer.

“There is nothing like this game in all of college basketball,” Mizzou Head Coach Frank Haith said. “The fan bases are split down the middle and the enthusiasm is second to none. You add in a national television audience and the excitement of the holiday season and you get the best rivalry game of the non-league season.”

Haith coached in his first Braggin’ Rights Game in 2011 and led the Tigers to a 78-74 victory.