You are here: Home / News / Mizzou-Bama in a lightning delay (VIDEO) 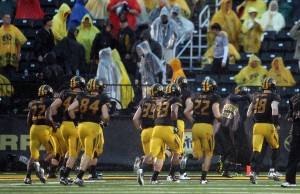 As Missouri players run off the field, fans exit the stands after a game against Alabama is suspended due to a lightning strike in the area at Faurot Field in Columbia, Missouri on October 13, 2012. The game was delayed one half hour. UPI/Bill Greenblatt

Lightning hit near Faurot Field just before 4 p.m. prompting officials to suspend the game. Skies are clearing, but rain continues to fall. If there is no ligthning after 30 minutes, there will be a 10 minute warm-up period and play will resume.

When play picks up, Alabama will be attempting an extra point following T.J. Yeldon’s 15 yard touchdown run. The Tide lead 27-0 with 8:40 to play in the first half. Alabama jumped out to a 7-0 lead, just 15 seconds into the game when Eddie Lacy ran 73 yards for a touchdown. Lacy added another touchdown midway through the first quarter and Yeldon gave Bama a 21-0 lead with a one-yard run late in the first.

Alabama outgained Mizzou 209-36 in the first quarter.  Tigers starting quarterback Corbin Berkstresser was 3 for 9 for 20 yards and an interception.  Alabama also blocked a punt which set up their third touchdown.