The Annual Education Report has released its scores for school districts statewide for the fourth cycle of the Missouri School Improvement Program. View the statewide MAP scores here. 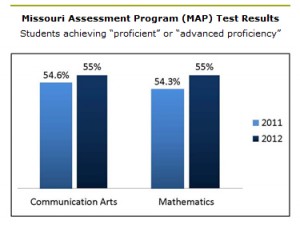 State Education Commissioner Chris NiCastro says with this new release, there are 510 districts that are fully accredited school systems, nine that are provisionally accredited, and three that are not. Those three districts are St. Louis, Kansas City and Riverview Gardens, all due to low scores of classification from the annual report.

She says this is the earliest the APRs have been released by the department of education, hoping to give an advantage to lacking school districts because it will give them access to their data that they can use for planning for this coming school year and use to really support their school improvement efforts.

Nicastro says she’s pleased with the progress students and schools are making. Statewide, the Elementary and Secondary Education Department reports that student achievement continues to rise.

This upcoming school year will be the first since Missouri became one of 33 states granted a federal waiver from the No Child Left Behind Act. Nicastro says the waiver does not address specific strategies for how students should improve and become proficient on their math and reading competency by the time they reached high school level. Since receiving the federal waiver, the department is promising to have all required students to pass reading and math by 2014.

State education officials say their new goals under the federal waiver are ambitious, yet achievable.