You are here: Home / Sports / Berkman hopes to play soon after break (AUDIO) 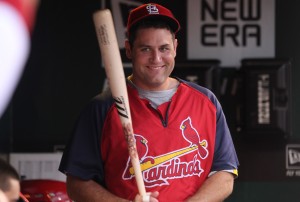 Lance Berkman jokes with teammates in the dugout during a game against the Colorado Rockies. UPI/Bill Greenblatt

Cardinals slugger Lance Berkman was back with the club on Monday after spending close to six weeks at his home in Texas rehabbing his knee following surgery in late May. Berkman’s next step is getting in baseball shape and he thinks he could ready to go right after the All-Star break.

Berkman swung a bat for the first time on Monday. The switch hitter took 25 cuts each from the left and right side. Berkman says he needs at least 100 swings on each side without being sore before he can consider himself ready to play.

The other part of his game that will be lacking is his timing. The plan hasn’t been finalized whether Berkman would go on a minor league rehab stint or jump right back into the majors.