You are here: Home / Sports / Mizzou gets down to work in new SEC era (AUDIO/VIDEO) 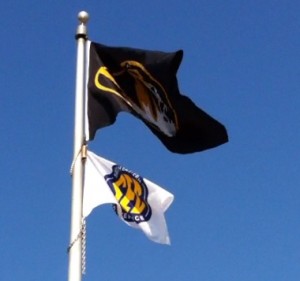 Mizzou officially became a proud member of the SEC on July 1, 2012

It became official on Sunday. The Missouri Tigers are  members of the Southeastern Conference. On Monday morning, the athletic department held a modest reception and raised the SEC flag to fly high above Waldsworth Plaza just outside Mizzou Arena to signify Mizzou’s entrance into the league.

Director of Athletics Mike Alden addressed faculty and staff on the move to the conference. Much has been made about a perceived “frosty” relationship between Missouri and the Big 12, but Alden stated that Missouri would not have had the opportunity to do the things they are doing today if it wasn’t  for all the Big 12 provided.

Alden then quickly pointed out that Missouri would be joining the best athletic conference from top to bottom in the country and that the department would be committed to enthusiasm, hard work and sticking to their core values, knowing the future looks bright for many years to come.

After the ceremony, Alden spoke with a handful of reporters who came out to cover the event.  He said he was at home with his family when the clock changed over to midnight on Sunday, and they had a private moment of celebration to reflect on what has been a frenzied few months since the announcement in November.

Alden said the realy work is just beginning.  He says it is time for the whole department to really focus in on every small detail in every sports program  to make sure the coaches and athletes are prepared for the challenges that lie ahead with getting acclimated to a new conference.  Alden is convinced that conference realignment and shifting will continue across the country, but made sure we knew where the Tigers stood.  “It is over for Mizzou, that’s for sure,” Alden joked.  “We’re excited, we’ve got a great home.”