As I watched the replay a couple of times, I came away with the same decision that home plate umpire Alan Porter came away with. Tyler Greene was tagged out at the plate, preserving the Royals 3-2 win over the Cardinals at Busch Stadium.

If you’ve not seen the play, check it out below. It’s something out of a local Little League game.  Three bad throws, led to an exciting play at the plate.  The only thing missing is the players didn’t go out for Ted Drewes custard after the game.

Watch Royals catcher Humberto Quintero’s right leg. It shields the plate and blocks Greene’s front foot just long enough until he can get the tag down on his chest.  If you look closely, you see Greene’s foot sort of scoot along the backside of the plate.  Unless you are zoomed in from above, there is no way of telling if Greene’s heel actually caught the point.  I believe even if instant replay was used, it would be hard to have enough evidence to overrule.  There’s no doubt it’s a close play, but the throw from Mike Moustakas is right on the money and it beats Greene. For a bang-bang play, it looks like the umpire got this right.

Just the half-inning before, Alex Gordon was called out at first on a beautiful pick off attempt from Yadier Molina. Yet, replays show he cleared deked out first baseman Matt Adams, by tucking his arm in away from the tag and then successfully reaching for first.  However, those plays are not what decided the outcome.   Both teams had numerous opportunities off the starters in this game, (Vin Mazzaro and Kyle Lohse). Both teams left a combined 15 runners on base.

See for yourself, below by clicking on the screen shot.  Video courtesy of MLB.com 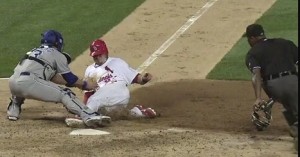