A state senator says he wants to see if there is a way to name memorial highways in the state that is better for the families of the people those highways would be named for. 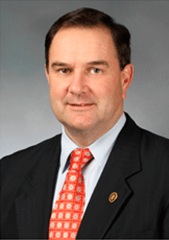 Senator Mike Kehoe (R-Jefferson City), a former Highways and Transportation Commission member, doesn’t object to naming roads for people like fallen soldiers or law enforcement officers, but after talking to the families of some of those individuals he wonders if the current process takes an additional toll on them.

“I have had a couple of comments from some families … never really all that negative … but more of a, ‘We’re unsure how the process went.’”

When the family of a fallen soldier or law enforcement officer wants to have a state highway named for that person, it fills out an application that must meet several criteria, have the necessary monetary backing and go before the Joint Committee on Transportation Oversight.

Kehoe says, “Some of them have suffered a loss in the last several months with somebody overseas protecting our country and now here they have to come to Jefferson City and sit through a committee process that they don’t understand and it seems to me it’s a tough road for some of those families to go.”

Several ideas have been tossed about. Kehoe says one example would be to have a section of highway in each county be designated a memorial highway, to which names can be added when appropriate. “You could, if the family wanted to, have that person’s name displayed as a memorial section of that highway … where it became a little bit of a simpler process to have a loved one’s name who gave their life for this state added to a certain stretch of highway and have it all together where they could be remembered together.”

Kehoe isn’t endorsing any one idea now, but says he wants to see the conversation continued and the issue receive attention in the next legislative session.

“I think it’s important that we look at it and we try to respect the time of the families in the process and not make them come all the way to Jefferson City every time they need a naming or they want to have that considered.”