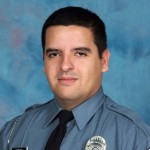 A Florissant policeman shot twice by a suspected burglar he was pursuing is partly paralyzed. One of the three bullets that hit officer Michael Vernon is lodged near his spine.Vernon remains in critical condition. Although two of the bullets also pierced his lungs, he was able to give officers a description of the man who shot him. Other officers, with the help of a tracking dog, arrested suspect Brian Cannon Junior about an hour later. He faces numerous chages. Court records show Cannon already is on probation for previous burglaries.

Previous Post: « Jefferson City judge ordered to reconsider ruling against inmate
Next Post: LGBT community in KC to get Chamber of Commerce »