You are here: Home / Sports / Blues drop opener to Kings 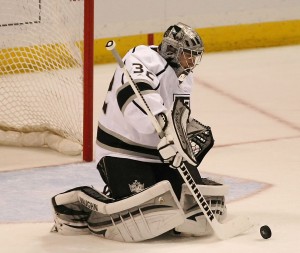 Jonathan Quick was strong in net throughout as the Los Angeles Kings beat the St. Louis Blues 3-1 in the opener of a Western Conference semifinal series on Saturday night.

Slava Voynov scored for his first point of the postseason, Matt Greene scored the go-ahead goal in the second period and Dustin Penner added an empty-netter for the Kings.

David Perron opened the scoring on a deflection in the first period for the Blues, the No. 2 seed in the West and the top remaining seed in the conference.

St. Louis also lost the opener of the first round in double overtime against the Sharks, before recovering to win four straight.