The U.S. Senate voted to reauthorize the Violence Against Women Act. Senator McCaskill voted for it, Senator Blunt against. 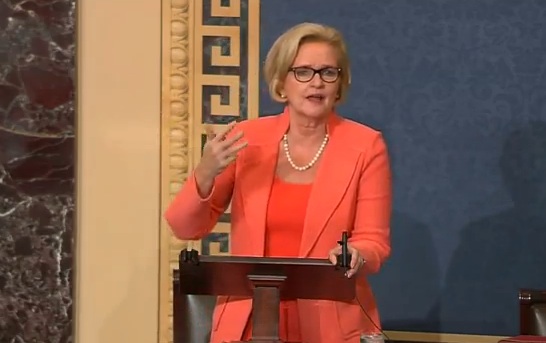 Sen. Claire McCaskill (D-Missouri) said on the Senate floor she’s been trying to help victims since she was the assistant prosecutor in Jackson County. She says things have improved since then but it is still a problem, and that the act is vital to saving women’s lives.

The measure had a filibuster-proof 61 co-sponsors, which included eight Republicans, and hours before the bill went to a vote, Senator Roy Blunt (R-Missouri) said it had broad, nearly unanimous support.

However, he then voted “No” on the bill.

Some Republicans didn’t support certain provisions, such as extending resources to immigrant victims and same-sex couples.

The Act was first passed in 1994 … reauthorization keeps the Act in place, and the funding it provides to states to assist in prosecution and advocacy programs.

The new bill would create new programs to raise awareness on college campuses.

Another provision, one some Republicans took issue with, would expand the number of visas issued to illegal immigrants in exchange for their testimony against offenders. Up to 10,000 visas are already given to law enforcement for that purpose; this proposal gives them an additional 5,000.

Another controversial provision would give the government the power to prosecute non-Indian men who abuse Indian women on reservations.

A group of Republican women in the House say they’ll introduce an alternative version of the bill.