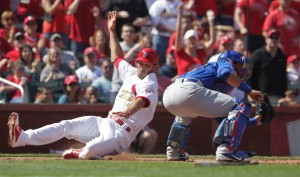 Cardinals starter Lance Lynn (2-0) gave up four hits and one run in 5 1/3 innings. He struck out five, walked two and lowered his ERA to 1.50 in a game delayed almost 2 hours by rain in a 5-1 win over the Cubs.

The Cardinals broke open a scoreless game with four runs in the fourth off Chris Volstad (0-1). Yadier Molina drove in Matt Holliday and Matt Carpenter with a single. Daniel Descalso had an RBI triple and Tyler Greene added an RBI single.  Matt Carpenter, filling in for Lance Berkman at first base, had the key hit in the inning, crushing a 3-2 pitch off the top of the wall in right. The hit put runners on second and third with one out.