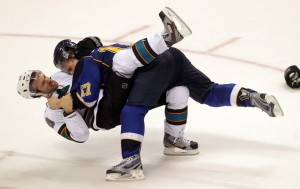 The St. Louis Blues got a kick start from a San Jose player and they battled through two goalies to pick up a 3-0 win in game two of their opening round series with the Sharks.  Starting goalie Jaroslav Halak had to leave the game after a collision with teammate Barret Jackman in the second period. Halak stopped all 12 shots he faced. Brian Elliott came on and finished the job stopping 17 shots.

The Blues got goals from David Backes and David Perron to snap a seven-game losing streak dating back to April 12, 2004 when they beat the Sharks in a quarterfinal series.

The Blues got a gift when San Jose defenseman Marc-Edouard Vlasic kicked the puck into his own net for a Blues goal.  Vladimir Sobotka’s wrist shot from the top of the left circle trickled through Niemi into the crease area, and in an attempt to clear the puck, Vlasic kicked it into his own net just 1:31 into the game for a 1-0 lead.