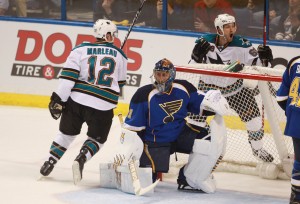 San Jose’s Martin Havlat scored his second goal of the game 3:34 into the second overtime to give the Sharks a 3-2 win over the St. Louis Blues on Thursday night in Game 1 of their Western Conference Quarterfinal series at Scottrade Center.

Havlat tipped in a shot from the point during a Sharks’ powerplay that gave San Jose a 1-0 lead, 6:02 into the second period. Perhaps playoff inexperience showed at times for the Blues as David Perron was whistled for slashing after getting checked behind the San Jose net. That penalty led to the first goal.

The Blues peppered Sharks goalie Antti Niemi all night, firing 42 shots at the former Stanley Cup winner. Patrik Berglund finally broke through, scoring his first two playoff goals of his career. The first came just 54 seconds into the third and then Berglund added a power play goal at 7:28 to give the Blues a 2-1 lead.

St. Louis looked liked they pulled off the throttle a bit late in the third and San Jose took advantage. With just over five minutes to play in regulation, Andrew Desjardins slipped a shot between the legs of Blues goalie Jaroslav Halak to tie the game at 2-2. Halak made 34 saves in the loss.

The Blues created more scoring opportunities, and kept consistent pressure on San Jose. In the end, Niemi was the key to game for the Sharks, making several big saves. If the Blues can continue to apply the same pressure on net, things will start going their way. They just can’t take silly penalties against an experienced team like the Sharks. “Overall, I think our third period was our best,” Berglund said. “We had a bunch of zone time and created scoring chances. Obviously we’ve got to try to build from that and regroup tomorrow and go back at it on Saturday.”