When a reporter for the St. Louis Post-Dispatch and his wife set sail for Naples, Italy on April 11, 1912, they did not expect to find themselves in the middle of the best-known maritime tragedy of the 20th century. 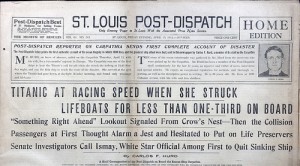 Carlos Hurd and his wife, Katherine, were aboard the cruise liner Carpathia, which on April 15 responded to a distress call from Titanic. When the former ship took aboard 705 survivors from the latter, the Hurds set about interviewing them.

The Director of Library and Collections for the Missouri History Museum in St. Louis, Christopher Gordon, says Hurd was, “the person who actually broke the story that was carried on the Associated Press wires all across the world.”

Hurd was faced with numerous challenges in telling that story. The Captain of Carpathia, Arthur Henry Rostron, did not want the survivors disturbed. He would not let Hurd use the ship’s wireless telegraph, and ordered his crew not to cooperate with the reporters.

Gordon says, “(Hurd) was almost playing cat-and-mouse with the crew of Carpathia. They were doing things like taking away the stationery from all the state rooms and had refused to sell him stationary from the ship’s on board gift shop. (Hurd) and his wife were gathering scraps of paper. They even used some toilet paper from what I understand to make some of these notes.”

See some of Carlos Hurd’s notes, courtesy of the Missouri History Museum.

The Hurds hid their notes from the crew and as Carpathia neared New York, Carlos prepared them for delivery. “He put it in a cigar box, tied it up, put the cigar box in some waterproof material and tied champagne corks to the box so it wouldn’t sink when it was thrown overboard.”

The ship was greeted by tug boats with reporters when it arrived, and Hurds recognized editor Charles Chapin of the Post-Dispatch’s sister newspaper, the New York World. Hurd threw the package to Chapin, who took it to the presses.

The next day, Carlos Hurd’s 5,000 word story ran in the World and the Post-Dispatch, and Katherine had a separate piece with stories from women survivors.

Before working for the Post-Dispatch, Hurd was also a Drury graduate and edited its newspaper, and worked for the Springfield Leader, now the News Leader.

Those notes are now at the Missouri History Museum.

Gordon says, “We have Carlos Hurd’s papers through his daughter, Francis Hurd-Statler … we have some of the handwritten notes, we have stationery from the Carpathia, post cards of the Carpathia but we also have blank stationery from the Titanic and copies of the article and the telegrams and things like that. It is a very rich collection and we’re very fortunate to have them.”

The Museum is holding special events this weekend to mark the centennial of the disaster. Find more details at its website.