The State Auditor’s Office released a statewide audit that points to wasteful spending and mismanagement of federal funds by Missouri’s state agencies. State Auditor Tom Schweich says he’s disappointed in the Statewide Single Audit findings, which focused only on the biggest spenders in the state. 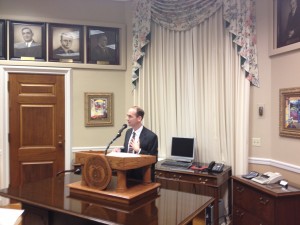 He says the statewide audit has been conducted for years, but there’s particular interest in it now since federal stimulus money is involved. He says he found no adverse findings with the departments of Mental Health, Transportation or Natural Resources. But, “I am disappointed by the problems identified in this report, some of which were repeated from last year,” Schweich said. “This reflects poorly on Missouri state government and shows a disregard for taxpayers here and across the country. It is my hope that agencies mentioned in this report will take immediate steps to correct the problems identified in this thorough audit, particularly in light of the economic challenges our state and nation continue to face.”

A report released by the office says the audit uncovered inadequate accounting controls, including $184 million in improperly recorded transactions at the Office of Administration-Division of Accounting. After federal authorities required a change in disbursement procedures, transactions were recorded twice in the state system, overstating revenues and expenditures.

He says Social Services and the Department of Education were of particular concern, and says TANF (temporary assistance to needy families … or, welfare) payments were made to residents who were ineligible to receive those funds.

The Department of Social Services-Family Services Division (DSS-FSD) did not timely update income information and lacked complete eligibility documentation for some Temporary Assistance for Needy Families (TANF) recipients. The DSS-FSD also failed to sanction the benefits of some participants who failed to cooperate with child support enforcement procedures. The DSS-FSD claimed more than $44 million in unallowable costs under the TANF program and continued to count unallowable educational program costs toward the maintenance of effort requirements, which was also a finding in Schweich’s previous audit report.

In addition, A DSS sub-recipient, the Human Development Corporation of Metropolitan St. Louis misused at least $669,704. The HDC received $4.23 million through the Low-Income Home Energy Assistance Program to help pay energy costs for low-income families, but it began having financial problems and ultimately failed, and the state had to use additional state funds to pay the energy supplier.

Schweich tells the press corps that when agencies fail to correct errors found in previous years’ audits, it’s disappointing, which is what he says happened with the Department of Social Services-Children’s Division, which he says “lacked adequate controls to ensure payments were proper and benefited only eligible clients. This year, of the 60 child care and development funds cases Schweich’s office reviewed, 15 percent lacked eligibility documentation, including six case files that were missing entirely, and 22 percent of the 60 payments auditors reviewed lacked adequate documentation and/or were not in compliance with DSS policies.”

In addition, the auditor’s office says the DSS-CD made more than $200,000 in American Recovery and Investment Act (ARRA) Child Care Initiative payments to ineligible clients, and Schweich’s office questioned more than $40,000 made through the Adoption Assistance program. Schweich made a similar finding in last year’s audit.

“As noted in last year’s audit, the Department of Health and Senior Services (DHSS)-Division of Senior and Disability Services (DSDS) did not ensure payments were only made on behalf of eligible persons. Of the 60 Medicaid recipients selected for testing this year, the DHSS-DSDS did not perform annual reassessments for 78 percent of them and could not even locate one of the selected files.”

Schweich’s audit found that the Department of Elementary and Secondary Education (DESE) is still failing to monitor ARRA programs in a timely manner. As noted in last year’s report, the DESE monitors ARRA programs a year after the funds are disbursed. So, no oversight of the approximately $8.9 million in School Improvement Grant funds occurred in fiscal year 2011. Weak monitoring and oversight can lead to misuse and improper expenditure of tax dollars.

Here are some other key findings in Schweich’s 2011 Statewide Single Audit:

· The Department of Labor and Industrial Relations (DLIR) lacked adequate controls and procedures to manage unemployment benefits, causing auditors to question $189,423 in costs.

· The MO HealthNet Division lacked adequate controls to ensure reports were produced and reviewed as needed to ensure compliance with requirements of the Medicaid program.

The United States Congress passed the Single Audit Act of 1996 to establish uniform requirements for audits of federal awards administered by states, local governments, and non-profit organizations. The Act requires an audit of the state’s financial statements and its use of federal awards.