Road crews are laying fresh yellow stripes on the interstates, and motorists are asked to watch for slow moving convoys of trucks … and wet paint. 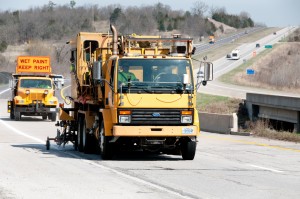 The Missouri Department of Transportation was able to get a head-start on striping the roads this year because of an early spring. But, MoDOT Engineer Tom Honich says because the department is reducing it’s operating budget, striping efforts have been reduced.

He says the goal is to have 5,5000 miles of major, four-lane routes done by Memorial Day. After that, work on secondary routes will begin. About half of the minor routes in Missouri will get fresh stripes, others will be left until next season, he says, part of the ongoing efforts to scale back projects and reduce costs.

He says roads that have had pavement surface repair such as potholes filled and chip seals will be given priority, but says they were lucky this year because fading due to snowplows scraping the roads was minimal with the mild winter.

Honich reminds motorists that striping crews are easy to spot, but are slow moving — about 10 miles per hour. He says by the time the last truck in the convoy passes, the paint should be dry. However, cars that cut into the convoy are likely to track the paint as well as get paint on their vehicles. He says the paint can be washed off of cars with high-pressure water, such as at car washes.