You are here: Home / Sports / Marathon basketball game makes it through the first 24 hours 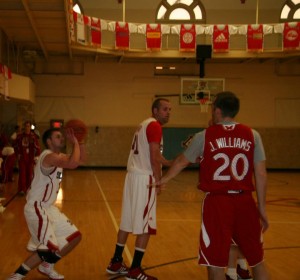 A player attempts a three-pointer during the 110-hour basketball game.

We’ve been following the attempt by 24 basketball players in St. Louis to break the Guinness Book of World Records mark for the longest basketball game to be played. Team Joplin and Team St. Louis have completed a little more than the first 24 hours of a planned 110 hour game at the Missouri Athletic Club in downtown St. Louis.

The group is raising money for the Joplin Chamber of Commerce to distribute to businesses and families still trying to recover last year’s tornado. Former Missouri Tiger Jeff Hafer, a Joplin native and JV basketball coach for Joplin, is leading all scorers with 604 points. Team Joplin leads Team St. Louis 2,611 to 2,584.