The Pentagon is requesting a new round of military base closings and realignments to cut spending, but Senator McCaskill says she won’t support the move, effectively killing the effort. 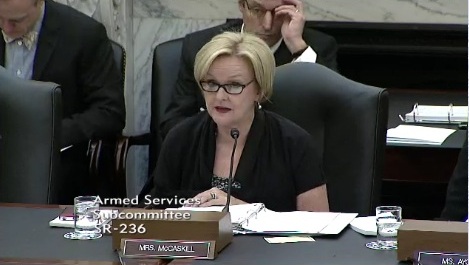 McCaskill is chairwoman of the Senate Subcommittee on Military Readiness. She tells defense leaders and fellow senators a new BRAC is not a cost-savings strategy.

“Last year, this subcommitee identified $1.7 billion in programs that could be eliminated or deferred in the military construction and environment construction accounts,” she says, calculating that it was about 10 percent of president’s budget request. “While I cannot promise we will find similar savings in this fiscal year, I do not believe there is anything the department is doing we cannot do better, and I do not believe there is any part of the budget that is off limits as we look for savings.”

She says she’ll be looking at every area of this subcommittee’s jurisdiction again this year “as we attempt to cut duplicative projects and programs, increase management efficiencies and reduce waste.”

McCaskill says the 2005 BRAC did not save the money it set out to, and she tells Pentagon officials that they had not made a convincing case that another round of base-closures would benefit taxpayers or national security.

She also says billions of dollars that could be saved by closing some of the 1,000 military installations overseas, many of which are relics of the Cold War. She points to a major expansion at West Point Academy and other construction projects she says can either hold or be scaled back.

“While I applaud the Department’s desire to find responsible places to achieve savings, there is one area where there is absolutely no room for compromise this year, and that is BRAC,” she tells the Department of Defense in the committee hearing. “I will not support the request for a BRAC process to be carried out in 2013. Government auditors have not yet completed a final analysis of the recently completed 2005 BRAC round. Congress needs to understand completely our planned force structure, including our overseas force posture, before we consider a new round of BRAC. The impact BRAC has on communities around the country, some in my homestate, is extraordinary. I will not support a process that is casual, or one that is rushed before we fully comprehend whether or not this task is clearly in the best interests of the American taxpayer and our national security. The Department has a long way to go before it proves to me that these initial criteria have been met.”

The Defense Department’s request for two new rounds of base realignments and closures should be compared to the cost effectiveness of the first four BRAC rounds, not those done in 2005 to transform installations to match force structure, a Pentagon official argues.

“The math is straightforward,” Dorothy Robyn, deputy undersecretary of defense for installations and environment, told the subcommittee. “BRAC is the single most effective thing the department has ever done in terms of producing greater efficiency and savings.”

Officials say the 2005 process had higher upfront costs and a slower return on savings than expected.

“The $11.2 billion DOD installations and environment budget request is down from $13 billion appropriated for the current year,” Defense officials say. “The budget request — which includes $4 billion for environmental work, mostly installation clean-up and pollution prevention, and $4 billion for installations’ energy use — does not reflect the BRAC proposal. The department receives about $4 billion in annual savings from the 2005 BRAC,” but acknowledged those realignments and closures won’t yield a net savings until 2018.