You are here: Home / Sports / Great weather and a great atmosphere on Big 12’s final day 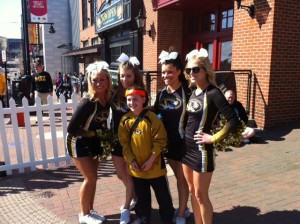 Clear blue skies and temperatures in the 70’s have made for the perfect day in downtown Kansas City outside of the Sprint Center as the Missouri Tigers face the Baylor Bears in the men’s tournament final.

Fans looking to get a great deal on tickets will find them outside the arena. Several ticket handlers are looking to get back some of their money since Kansas lost last night and many Jayhawks fans headed home. “Brutal,” was how one guy explained the demand (or lack thereof) for final game tickets. One handler, who drove up from Dallas, TX said he would be lucky to get half of what he spent on today’s game. “These $60 tickets? I’ll be lucky to get $30 for them. There just isn’t much demand with Baylor in the final.”

The Big 12 has plenty of activities for kids and adults including pop-a-shot, free throw and three point contests, plus a full size court where local teams from the Special Olympics competed in exhibition games.

I didn’t see many Baylor fans, but there were plenty of Mizzou fans out in full force ready to make Kansas City feel like a home game.  The Tigers are 4-0 at the Sprint Center this season.  For in-game updates follow us on Twitter at Missourisports