The House Budget Committee has completed its work on a $24 billion budget.  The 13 budget bills must now clear the Rules Committee in order to go to the full House. 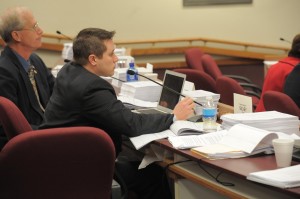 The proposed budget replaces a portion of the money taken from the Supplemental Aid to the Blind Program. An appropriations committee had recommended that $28 million program be eliminated and Chairman Ryan Silvey (R-Kansas City) took up that recommendation in his proposed budget. He proposed using that money to help replaces $106 million that was cut from higher education in the Governor’s budget proposal.

An amendment proposed by Representative Chris Kelly (D-Columbia) was adopted that took about $2 million from the Department of Economic Development and put it back into Supplemental Aid to the Blind. Another $4 million depends on passage of HB 1835, which removes the sales tax exemption on the sales of newspaper supplies and equipment.

Silvey says the $6 million total would address concerns about providing a transitional benefit for those benefitting from the Supplemental program who make just barely too much money to benefit from Medicaid. He says the $6 million would help around 600 of the 2,800 people who benefitted from the original $28 million.

Silvey expressed confidence HB 1835 will pass to the Senate, and if it doesn’t reach the Governor he believes the disparity will be worked out in conference.

As for proposing an end to the tax credit, Silvey says, “The newspaper industry has been particularly vocal about the need to end corporate welfare or end corporate giveaways and I figured they should be the first in line.

The House’s budget also removes 444 estimated amounts, marked in the budget with an “E” next to some line items. Those were replaced with traditional amounts that total almost $957 million across the entire budget.

One of those that was removed was for the State Emergency Management Agency, under another amendment offered by Representative Kelly. He says he wants the Governor to have the flexibility to respond to a disaster, but wants increased communication between the Governor and the General Assembly before such decisions are made.

The Committee also adopted a “mega amendment,” addressing multiple issues. One of those was a decrease of the amount that various agencies were paying that went toward the salary of three employees of the Governor’s Office. Those positions, the Director of Boards and Appointments and two assistants, were last year transferred to the Department of Insurance but continued to work in the Governor’s office. The Department of Insurance was billing other departments for portions of that salary. The total budget reduction was $172,421.

House leadership plans to take the budget up after the legislature returns from spring break.