The Republican party candidates for United States Senator have for the first time been together in a debate, Saturday at Lincoln Days in Kansas City’s Crown Center. The trio said more on stage about the President than they did about Senator Claire McCaskill or one another. 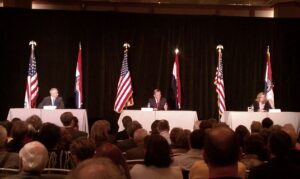 All three said the president’s health care reform plan must be repealed. Congressman Todd Akin said a new approach must be taken. “The way to attack Medicare is to get rid of the government price setting and use the Medicare dollars so that people actually have purchasing power and can make choices.”

Former state treasurer Sarah Steelman says Republicans are going to have to recognize that there is a health care problem in the U.S. “The cost of paying for insurance keeps going up and up and up and it takes more of families’ discretionary income.”

Businessman John Brunner told the audience not to forget that Senator McCaskill’s was the tie-breaking vote in favor of the health care reform package, and he told Republicans to stop calling it “Obamacare.” “I think we just need to call it the Obamacare program and go forward with that and keep those two together and repeal both of those folks.”

The three were asked to consider what they would do to provide funds for highways and infrastructure. Congressman Akin says before he would raise the federal gas tax, he would look at an idea that has been promoted by the Director of the Missouri Department of Transportation. “I think we’d do better to copy what the governor or Indiana did, and that is to simply put some toll booths on, say, Highway (Interstate) 70, because when you do that it’s a user fee. If you don’t use it, you don’t pay the fee.” Brunner and Steelman both say they oppose the toll roads idea.

Steelman brought the infrastructure conversation back to one of the main budgeting ideas she supports. She says the government has plenty of money already, but needs to re-prioritize it through zero-based budgeting. “We need to go in to each program in the federal government and look at it and find out what it’s about. Is it constitutional? If it is, do we really need it? If we really need it should it be at the federal level, the state level or at the local level?”

Brunner says he would repeal the federal gas tax. “Why is the money going to Washington D.C. and then coming back in the forms of earmarks and political decisions in terms of what really needs to be fixed in different parts of the state?”

Citing the possibility the likelihood that the reformulation of the federal farm bill will be pushed back to next year, thereby falling to the winner of this campaign, the three were asked what they would do with it. The candidates focused on regulations, land use issues and restricting the hours that children can work on farms, saying those issues are the ones farmers are concerned with the most, though none of those are farm bill issues.

Congressman Akin said he would try to phase out direct payments over time, where he says the government is doing “sort of bail-outy types of things.” He also wants to separate out social programs, like food stamps, from the farm programs in that legislation.

While the debate on the stage was low-key and congenial, the fireworks came to the row of reporters covering the event. A Brunner campaign staffer handed out a release criticizing Steelman’s plan for what she would do in her first 60 days in office. It said her plan contained no new ideas, calling it a “cut and paste” platform.

Brunner was asked why he didn’t bring the issue up on the stage. He said he wanted to keep a friendlier tone in front of fellow Republicans. “We’re gonna move down this campaign trail. It’s still early. We’ll have plenty of opportunities.”

Steelman questioned why Brunner did not bring the issue up in front of the audience. “He didn’t show up for the first two debates. Here, he had a chance. He didn’t take it.” She added, “Maybe he’s worried about me.”