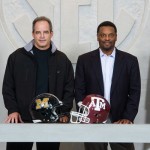 Mizzou and Aggie helmets in front of the SEC logo in the downstairs lobby. (Photo by RD Moore)

Former Mizzou coach Mike Anderson says he’s still pulling for Missouri.   “Those kids are part of my family. They will be for the rest of my life. Obviously they were hurt and even when you talk about some of the fans. Why? When I got there, there was not a lot of empathy about the program. Now there are feelings about it and I understand that. But I’m so excited for those guys. They’re going to do great things.”

Bradley Beal, named SEC men’s hoops freshman of the week for the SIXTH time this year.

Eric SanInocencio of SECDigitalNetwork.com, wrote up a story about last week’s SEC coaches meeting. In case you missed the awkward full conference photo that was compared to as a bad elementary school photo, you can check that out here.

The latest on the poisoned trees at Auburn’s Toomer’s Corner.