You are here: Home / Legislature / Voter ID bill to seek perfection in House this week (AUDIO)

Majority Floor Leader Tim Jones (R-Eureka) says he will bring legislation requiring photo identification for voters up for perfection again this week in the Missouri House of Representatives. The bill was debated for less than a half-an-hour on Wednesday. 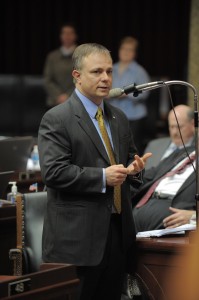 Its sponsor, Speaker Pro Tem Shane Schoeller (R-Willard) presented the bill by citing media reports of instances of voter fraud in Missouri since 2006. He told lawmakers his bill will provide photo IDs to qualified Missourians for free, and offers provisional ballots to those who show up to vote without one.

He says there are many places photo identification is required today, including at banks. “The reason why is that you want to be able to protect people’s money. Well, the same thing when we go to vote.”

Assistant Minority Floor Leader Tishaura Jones (D-St. Louis) rejects that argument, noting that going to the bank is “not a constitutional right. Voting is a consitutional right.”

Jones added that the bill is unconstitutional under a 2006 ruling by the state Supreme Court that the legislature can not impose additional requirements on the right to vote. She says for the legislation to pass now would be for lawmakers to get ahead of themselves. “Last year we approved a proposed constitutional amendment that would grant lawmakers the authority to impose a photo voter ID requirement, but that amendment won’t go on the ballot until November. Until and unless voters ratify a constitutional change, it’s premature for us to pass legislation exercizing authority that we don’t posess. 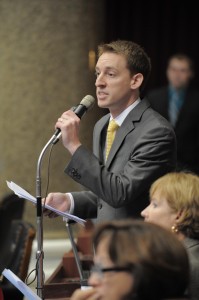 Representative Jason Kander (D-Kansas City) was questioned by two House Republicans during debate, who cited his candidacy for the Secretary of State’s Office and said he should support it. Kander opposes the bill, stating it would disenfranchise close to 230,000 Missourians.

He was first inquired by Representative Todd Richardson (R-Poplar Bluff)…

Representative Caleb Jones (R-California) first asked Schoeller to explain the bill’s provisions and rather it would disenfranchise voters. Maintaining that it would not, Jones then turned his attention to Kander…