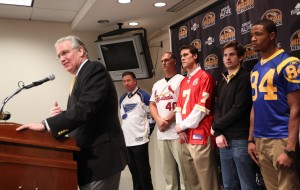 Missouri Governor Jay Nixon announced the 2012 Governor’s Joplin Habitat Challenge. The goal, in partnership with Habitat for Humanity, is to build 35 new homes in the Joplin this year and provide continued aid to the city’s recovery.

Speaking prior to the Mizzou-Kansas basketball game on Saturday, Governor Nixon was flanked by members of the St. Louis Blues, Cardinals, Rams, Kansas City Chiefs and Royals, Kansas Speedway and Missouri Tigers. The 35 homes will be divided into seven different neighborhoods, which each neighborhood assigned a sponsor among the seven teams. Players, coaches and members of each sports organization will visit the neighborhoods throughout the year to work alongside volunteers and professional builders.

Missourians can visit MO.gov to sign up to volunteer with the team of their choice in Joplin or contribute online. “I am proud that Missouri’s teams are leading the way and I encourage all Missourians to get involved,” said Nixon. “Together, we’ll directly tackle the issue of building 35 homes in Joplin and provide the resources for Habitat for Humanity to expand in the years to come.”

An EF-5 tornado hit Joplin on May 22, 2011 and destroyed more than 7,700 homes and thousands of Joplin residents continue to live in temporary housing.