Members of the Black Caucus held a press conference to make clear their intentions to block any attempt at passing a measure that would weaken Missouri’s anti-discrimination standards. 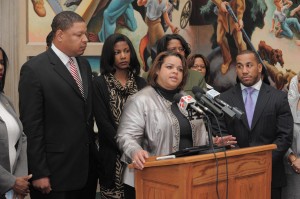 House Democrat Steve Webb, head fo the Black Caucus, was joined by Rep. Tishaura Jones, assistant minority floor leader, in saying they’ll try to prevent a vote in either the House or Senate on a measure that would change the state’s workplace discrimination laws.

Sen. Shalonn “Kiki” Curls says democrats in the Senate fillibustered the bill, which would put stricter standareds in place for employees who sue for discrimination. The bill would also cap damages.

It would also limit the damages victims can recover.

Gov. Nixon vetoed the bill last year, saying it would roll back decades of civil rights progress. Webb and others say this bill is another attempt that strikes at the very principles of equality, and not just for African Americans, but for the disabled as well.

Webb and Jones say they have heard no reports from any business saying they didn’t want to relocate or set up shop in Missouri because of our state’s discrimination standards.

As far as being stronger than federal requirements, Jones says, “We’re proud that Missouri’s standards are higher.”

And as far as whether reducing those standards would create jobs, Webb says, “If becoming more tolerant of discriminatory practices brings one job to Missouri, we don’t want it.”