The State Supreme Court is being asked to throw out the new districts proposed for the House of Representatives. A dozen private citizens — most from Kansas City and St. Louis and their surrounding areas — are challenging the map’s constitutionality. They are both democrats and republicans. 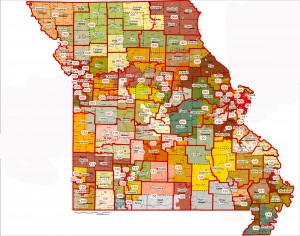 One of them is former legislator Joan Bray of St. Louis County. Bray says her committee, which worked on map proposals to submit to the appellate panel of judges that ultimately drew the final lines, worked hard to follow the constitutional requirements of the newly drawn boundaries. She says the apportionment commission ignored many of those constitutional mandates, violating the constitution.

The lawsuit also says the map has significant population imbalances in neighboring districts and has some districts with “strange shapes” that violate the mandate that districts be “as compact as may be.”

The high court of Missouri has already thrown out the new maps for the state senate and congressional districts, largely due to the same types of constitutional deviations. The requirement that districts be compact was a sticking point for the plaintiffs in those cases, and evidently with the judges who handed down an opinion in the cases.

Bray adds that the House of Representatives map also has more than a standard deviation when it comes to population — some districts with 1,000 or more residents than others. She says that cuts to the very heart of the matter, “one vote for every person.”

The court is asking to expedite the case because the candidate filing period begins Feb. 28, and those running for office need to know which district they’re running for.

Court Documents: Petition for a Writ of Prohibition (PDF), Suggestions in Support of Relators’ Petition (PDF)

Bob Priddy contributed to this report.