The House Budget Committee has advanced a proposed change to the Missouri Constitution to limit future state spending. 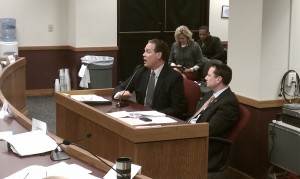 Representative Eric Burlison (R-Springfield) is sponsoring the measure, HJR 43. It would limit the amount of state general revenue that can be appropriated to the rate of inflation plus population growth.

Under the measure, 1.5 percent of growth over the previous year could be used for appropriations. Any amount between 1.5 and 2.5 percent would be used to pay off state debt. Any amount beyond that would be divided between two emergency funds that would replace the current Budget Reserve Fund, more commonly called the Rainy Day Fund. When those funds are full if there is more growth, it could go toward a state income tax refund.

The proposal is part of the House Republicans’ legislative plan, the “Blueprint for Missouri.”

The Committee voted 20-9 to pass the resolution, with Representative Chris Kelly (D-Columbia) the only Democrat to favor it.

Kelly offered an amendment that made the 2008 budget year the baseline for the resolution, when general revenue was roughly $8 billion dollars. That means the amendment would not kick in until the fund reached that level, which lawmakers agreed is unlikely in the forseeable future.

Burlison says the change would stabilize the budget process and prevent the creation of programs in years of excess only to have them cut when the economy takes a down turn. He says now is the time to enact the resolution, when the economy is down. “We’re experiencing the difficult end of this. We’re looking back and saying if only legislators prior to us had had something like this in place then we wouldn’t have been having to make some of these very difficult cuts that we’re making today. We would have had money in reserves…in savings that we could go to.”

Among those opposing the bill, Representative Genise Montecillo (D-St. Louis) says she worries that even in the high mark year of 2008 some funding levels were not sufficient. “Even if I could get all the money in the world for education I have some concerns for social services as well. So, it seems to me that we’re kind of locking some groups into a continued future of being under funded when our needs in our state are becoming greater with unemployment still at really high levels.”

Other Democrats criticized that Republican leadership is trying to limit spending while offering no plans to generate more revenue such as increasing the cigarette tax or collecting internet taxes.

Representative Kelly countered, “As you know, I am a big supporter of raising more revenue around here, but raising revenue is a different question than managing the revenue that we have.”

Representative Burlison noted that the resolution exempts new or increased tax revenues or fees that are voter approved from appropriations growth limit calculations for the year they are passed.

The measure moves on to the Rules Committee, which meets tomorrow at 9:30 a.m. As a constitutional amendment, it would eventually have to go before Missouri voters.

Previous Post: « Today is deadline to register to vote in presidential primary (AUDIO)
Next Post: K-State to much for Mizzou women »