Even after years of training, enforcement, sting operations and busts … meth production in Missouri is still on the rise. Attorney General Chris Koster is urging the legislature to make psuedoephdrine a prescription only drug to keep it out of the hands of meth cookers. Last session, the House passed the measure … the Senate did not. 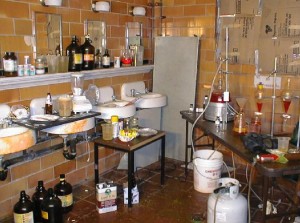 Captain Tim Hull with the Highway Patrol says other states that have put such laws in place have seen a drastic reduction in meth labs. Hull says in Missouri, pseudoephedrine sales are a big tip off to investigators.

Final numbers for 2011 aren’t in yet, but Hull says we’ve already surpassed the previous year’s total of 1,799. He says a few months last year saw significant increases — meth lab busts were up 26 percent in February, 27 percent in March.

Missouri gave up its No. 1 spot as the state with more meth busts than any other state last year …. to Tennessee. Hull doesn’t know if that will be the case again since numbers are on the rise. Missouri had held the infamous title for several years.

About 45 municipalities and counties in Missouri have passed ordinances that ban over-the-counter pseudoephedrine. Koster says a state-wide ban is necessary to decrease meth production here. He says the majority of state law enforcement and prosecutors are in favor of making pseudoephedrine availabe by prescription only. “There are about 11,000 busts throughout the U-S each year,” and Missouri accounts for nearly 20 percent of them, Koster says.

Missouri typically tops the nation in meth lab busts — so is there really that much more meth activity in Missouri or are our law enforcement officers just doing a better job making busts? Hull says it’s hard to say, but that Missouri is aggressive on investigations, following up on traffic stops and leads. He says tracking sales of large quantities of pseudoephedrine is a big tip off to investigators since that’s one ingredient necessary for the manufacture of methamphetamine.

Some 45 communities in Missouri have made over-the-counter pseudoephedrine sales illegal. Koster has singled out the Senate it failing to pass such a law last year.