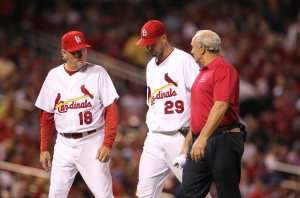 It appears St. Louis Cardinals pitching coach Dave Duncan will step down from the team in order to help look after his wife, Jeanine, who is recuperating from brain surgery last August.  Duncan took a leave of absence during the season when his wife underwent surgery to treat a brain tumor. He returned the final game of the season and coached throughout the playoffs.

No word yet on who will step into Duncan’s role, but that will be determined soon by general manager John Mozeliak and manager Mike Matheny.  The St. Louis Post-Dispatch is reporting that an official announcement from the team could be coming as early as Friday morning.

Missourinet.com will have the latest information throughout the day.