You are here: Home / Sports / Cardinals World Series trophy coming to a town near you 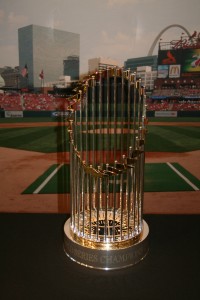 Beginning this Saturday, Jan. 7 and running through Apr. 7, the St. Louis Cardinals will have the 2011 World Series Trophy on display at several U.S. Cellular stores throughout Missouri, Illinois and Oklahoma. In all, the tour will include 53 stops.

The 30-pound trophy stands two-feet tall and features 30 gold-plated flags, one for each of the Major League Baseball teams, which rise above an arched baseball with latitude and longitude lines symbolizing the world. The trophy will travel in first class inside a clear case in its own luxury vehicle throughout the tour.

At each of the trophy tour stops, Cardinal fans are invited to come to the retail location and get a photograph taken with the trophy at no cost. Attendees are also welcome to bring their own cameras or devices to take pictures.