The Missouri Chamber of Commerce is joined by business organizations in asking legislators to pass three pro-jobs initiatives they say wouldn’t cost the state anything, but would save employers and businesses millions. 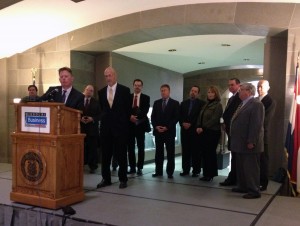 Chamber President Dan Mehan says the chamber is pleased with jobs initiatives addressed by the legislature last year, but points to some unfinished business.

Gov. Nixon vetoed legislation last year that would have struck case law that offered workers more protection than federal law if they were discriminated against, and would have capped the damages for which they could sue. So, Mehan says they’ll give it another go.

Associated Industries of Missouri President Ray McCarty says anti-discrimination laws should be in line with federal requirements, and caps on how much former employees can sue for should be put in place.

State Business leaders said that was a political stunt, and businesses need that protection.

“We’ve had members who have fired someone for sexual harrassment, and then have to pay unemployment,” he says. “We think that’s ridiculous.”

The National Federation of Independent Businesses is pressuring legislators to take up and pass tort reform.

“For many small business owners, even one frivolous lawsuit can cripple a business,” Jones says. “NFIB wants to bring common-sense to the areas of joint several liability (which is where two or more people can be held liable in the same lawsuit), changes to premisis and trespassing laws, permit liability protection and requiring those who bring frivolous lawsuits to pay if they lose.”

Phelps also says occupational disease laws need to be addressed, so that those who contract an illness on the job can get taken care of under the workers’ compensation process.

Under current law, those suffering from occupational illnesses can sue criminally and civilly, “and that was never the intent,” he says.

Phelps also says co-employee laws need to be overhauled: Right now, an employee can be sued for accidentally injuring another employee. “Employers in Missouri want to protect their employees from that.”

Previous Post: « Date announced for 2012 State of the State address
Next Post: 2011 Missouri traffic fatalities the lowest in 62 years »