After two failures to pass an omnibus economic development package, the legislature looks again to job creation, and job protection. 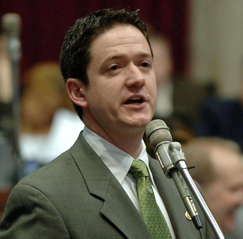 Rep. Tim Jones (R-Eureka) is among leading Republicans in the House. He says he expects to tackle legislation that would address workers’ compensation, occupational disease and the state’s second injury fund.

“Those are three issues that affect small businesses more than most people realize,” he says.

Jones says he’s been talking with business leaders throughout the state about their bottom line in recent months, and the biggest reason costs for employers are going up is because there’s a lot of uncertainty in the system.

Jones points to three components of the current business climate in Missouri that are hindering employers from earning more, hiring more: co-employee liability, occupational disease and the state’s second injury fund. A measure did not get approval last year, despite lots of work by both the House and Senate, Jones says.

“Insurance companies are having to rewrite policies with riders, which costs money, and businesses are finding themselves wrapped up in small claims court suits, which is a fairly new thing for most of them,” he says.

Jones will also focus on education legislation: “Everything from the foundation formula to the “Turner Fix,” as its called, to looking at some significant education reforms.” He points to our two largest metro areas now encapsulating unaccredited school districts — Kansas City and St. Louis. “It’s something we can’t continue to ignore … Children who just because they live in a certain zip code are set up for failure just because we have horribly failing districts.”