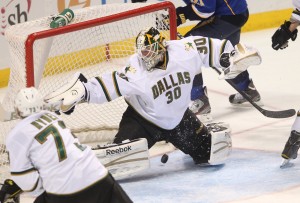 The Blues watched a 4-1 lead shrink in the third period as the Dallas Stars rallied with two goals during a seven minute span, but St. Louis held on for a 5-3 win Monday night at Scottrade Center.

The Blues got a pair of power-play goals from Chris Stewart and Jason Arnott. Stewart scored twice and Adam Cracknell, recalled from Peoria (American Hockey League) who replaced injured T.J. Oshie, also scored. Evgeny Grachev tallied his first NHL goal, while Jaroslav Halak stopped 20 shots to improve to 6-1-4 in his past 11 starts.